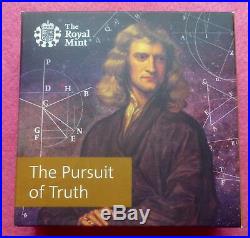 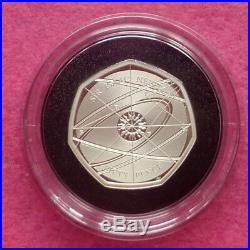 SIR ISAAC NEWTON 2017 UK 50P SILVER PROOF PIEDFORT COIN BOX + COA. In 2017 the Royal Mint issued this lovely silver proof piedfort coin, to celebrate the 300th Anniversary of Newton’s Report. On the state of the Gold and Silver Coin’. Isaac was a Master of the Mint, and he wrote a report detailing problems with the United Kingdom’s Coinage of the day. Newton’s report highlighted a wide variation in the value of gold coin when measured against silver> This was especially true in relation to imports and exports involving other countries. It was suggested setting the gold guinea’svaalue at 21 shillings which paved the way for the introduction of the Gold Standard a century later. Isaac Newton was born in Woolsthore in Lincolnshire on Christmas Day 1642. He went on to become a student of Trinity College, Cambridge in 1661, whilst there Isaac studied Plato and Aristotle, Isaac was a new breed of’natural philosophers, whose approach to science was defined by the use of rigorous experimentation and mathematics. Newton once wrote’Plato is my friend, Aristotle is my friend but my greatest friend is truth. The clarity of vision shaped his life;s work and also drove his dedication to what he called’the king’s business’ at the Royal Mint. In 1696 Isaac went to work for the Royal Mint, he was appointed’Warden’. At the time Britain’s finances were in crisis, with one in ten circulating coins believed to be forgeries. The old silver coins were well worn and degraded by the’clipping of the edges by thieves gathering precious metal. At the age of 53 Isaac bought his precision and devotion to accuracy to his new role, during the time of the Great Silver Recoinage of 1696. The project involved recalling the old compromised coins and issuing a new reliable currency. Being a’Warden’ at the time Isaac’s primary roll was policing the quality of the coinage. Isaac was appointed’Master of the Mint’ on his 57th birthday. Newton’s vision for all the coins to be of correct weight and fineness, lead him into battle with the member of the’Trial of Pyx’ in 1710. The assembly meets every year to assess the weight of fineness of the realms coinage, in 1710 Isaac was present at the’Trial’ someone suggested that the coins were’a little off’ what they should be. Dear Isaac went into a rage, suggesting that the gold plate that was used was inaccurate…… After making the necessary checks, it turns out Isaac was right! This lovely coin is a piedfort edition, which means it is twice the normal thickness of a standard silver proof coin and is a fitting tribute to Isaac Newtons publication’Mathematical Principles of Natural Philosophy’ in 1687. Comes complete with a numbered Certificate of Authenticity , box, information booklet and card board outer. Diameter: 27.30 mm. Reverse Designer: Aaron West. Obverse Designer: Jody Clark. A receipt must be kept and trackable information provided. We are dedicated to ensuring the highest possible quality service to our customers. Made with love by. Add a map to your own listings. The item “SIR ISAAC NEWTON 2017 UK 50P SILVER PROOF PIEDFORT COIN BOX + COA” is in sale since Tuesday, February 5, 2019. This item is in the category “Coins\Coins\British\Decimal Coinage (c.1971-Now)\50p”. The seller is “thecoinconnection” and is located in TAMWORTH. This item can be shipped worldwide.