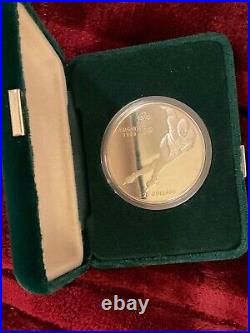 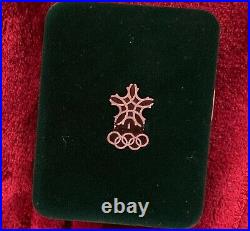 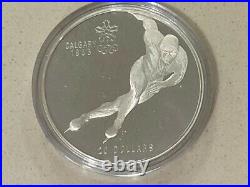 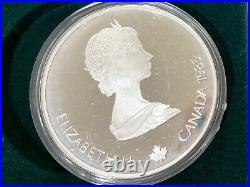 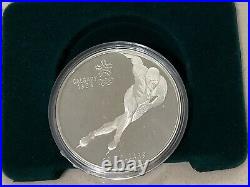 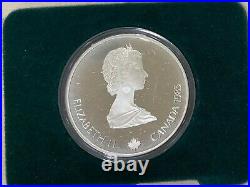 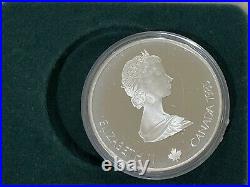 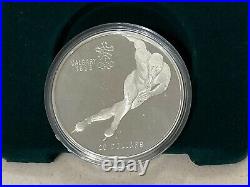 Queen: 6 February 1952-present. 1988 Winter Olympics in Calgary – Commemorative issue – Speed Skating 1985 Silver 20 Dollars 40mm (33.63 grams) 0.925 Silver 1.001 oz. ASW ELIZABETH II CANADA 1985, Crowned bust of Queen Elizabeth II right. CALGARY 1988 20 DOLLARS, Alpine. 1988 Winter Olympics, officially known as the. XV Olympic Winter Games. Les XVes Jeux olympiques d’hiver , was a multi-sport event celebrated in and around Calgary, Alberta, Canada, between February 13 and 28, 1988 and were the first Winter Olympics to be held over a whole two week period. The host city was selected in 1981 over Falun, Sweden, and Cortina d’Ampezzo, Italy. Most events took place in Calgary while several skiing events were held in the mountain resorts of Nakiska and Canmore, west of the city. A then-record 57 nations competed and 1,423 athletes participated. As it had in Montreal in 1976, Canada again failed to win a gold medal in an official medal event as the host nation. Finnish ski jumper Matti Nykänen and Dutch speed skater Yvonne van Gennip were individual medal leaders with each winning three gold medals. The games are also remembered for the “heroic failure” of British ski jumper Eddie “The Eagle” Edwards, and the Winter Olympic début of the Jamaica national bobsled team, both of which would be subjects of major feature films about their participation in the games. The Calgary games were at the time one of the most expensive Olympics ever held, but the organizing committee turned record television and sponsorship revenue into a net surplus that was used to maintain the facilities built for the Olympics and develop the Calgary region into the heart of Canada’s elite winter sports program. The five purpose-built venues continue to be used in their original functions, and have helped the country develop into one of the top nations in Winter Olympic competition; Canada more than quintupled the five medals it won in Calgary at the 2010 Vancouver Winter Olympics. CALGARY 1988 20 DOLLARS, Alpine skier. The IIHF called the Olympic Saddledome “the finest international rink in the world”. It is also the largest hockey arena ever used at the Olympics with a capacity of 20,016 in 1988. Is a country, consisting of ten provinces and t hree territories, in the northern part of the continent of North America. It extends from the Atlantic to the Pacific and northward into the Arctic Ocean, covering 9.98 million square kilometres (3.85 million square miles) in total, making it the world’s second-largest country by total area and the fourth-largest country by land area. Canada’s common border with the United States forms the world’s longest land border. Canada is sparsely populated overall, the majority of its land territory being dominated by forest and tundra as well as the mountain range of the Rocky Mountains; about four-fifths of the population live near to the southern border. The majority of Canada has a cold or severely cold winter climate, but southerly areas are warm in summer. The land now called Canada has been inhabited for millennia by various Aboriginal peoples. Beginning in the late 15th century, British and French colonies were established on the region’s Atlantic coast. As a consequence of various conflicts, the United Kingdom gained and lost North American territories until left, in the late 18th century, with what mostly comprises Canada today. Pursuant to the British North America Act, on July 1, 1867, three colonies joined to form the autonomous federal Dominion of Canada. This began an accretion of provinces and territories to the new self-governing Dominion. In 1931, Britain granted Canada near total independence with the Statute of Westminster 1931 and full sovereignty was attained when the Canada Act 1982 severed the vestiges of legal dependence on the British parliament. Canada is a federal parliamentary democracy and a constitutional monarchy, Queen Elizabeth II being the current head of state. The country is officially bilingual at the federal level. It is one of the world’s most ethnically diverse and multicultural nations, the product of large-scale immigration from many countries, with a population of approximately 35 million as of 2015. Its advanced economy is the eleventh largest in the world, relying chiefly upon its abundant natural resources and well-developed international trade networks. Canada’s long and complex relationship with the United States has had a significant impact on its economy and culture. Canada is a developed country and one of the wealthiest in the world, with the tenth highest nominal per capita income globally, and the eighth highest ranking in the Human Development Index. It ranks among the highest in international measurements of government transparency, civil liberties, quality of life, economic freedom, and education. Canada is a Commonwealth Realm member of the Commonwealth of Nations, a member of the Francophonie, and part of several major international and intergovernmental institutions or groupings including the North Atlantic Treaty Organization, the G8, the Group of Ten, the G20, the North American Free Trade Agreement and the Asia-Pacific Economic Cooperation forum. This item is in the category “Coins & Paper Money\Coins: Canada\Dollars”. The seller is “dressedtothecanines” and is located in this country: US. This item can be shipped to United States, Canada, United Kingdom, Denmark, Romania, Slovakia, Bulgaria, Czech Republic, Finland, Hungary, Latvia, Lithuania, Malta, Estonia, Australia, Greece, Portugal, Cyprus, Slovenia, Japan, China, Sweden, Korea, South, Indonesia, Taiwan, South Africa, Thailand, Belgium, France, Hong Kong, Ireland, Netherlands, Poland, Spain, Italy, Germany, Austria, Bahamas, Israel, Mexico, New Zealand, Philippines, Singapore, Switzerland, Norway, Saudi Arabia, Ukraine, United Arab Emirates, Qatar, Kuwait, Bahrain, Croatia, Republic of, Malaysia, Brazil, Chile, Colombia, Antigua and Barbuda, Aruba, Belize, Dominica, Grenada, Saint Kitts-Nevis, Saint Lucia, Montserrat, Turks and Caicos Islands, Barbados, Bangladesh, Bermuda, Brunei Darussalam, Bolivia, Ecuador, Egypt, French Guiana, Guernsey, Gibraltar, Guadeloupe, Iceland, Jersey, Jordan, Cambodia, Cayman Islands, Liechtenstein, Sri Lanka, Luxembourg, Monaco, Macau, Martinique, Maldives, Nicaragua, Oman, Peru, Pakistan, Paraguay, Reunion, Vietnam, Uruguay.