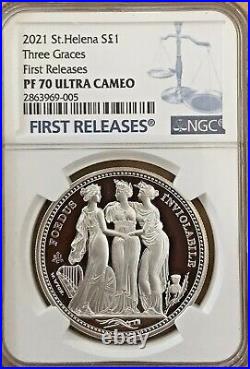 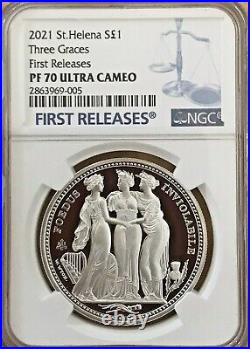 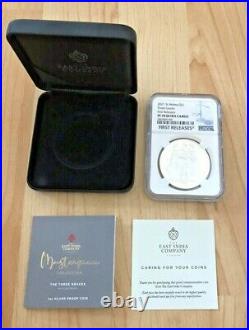 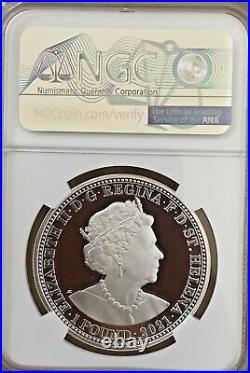 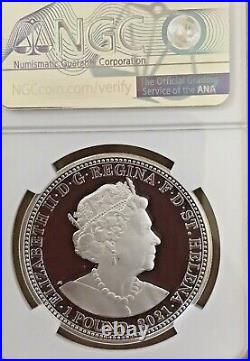 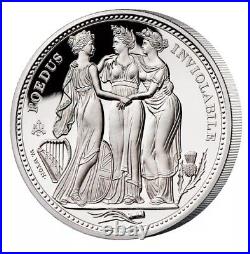 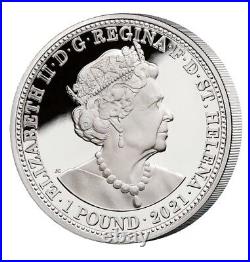 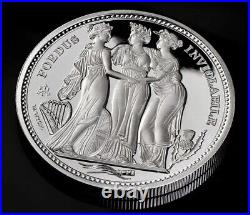 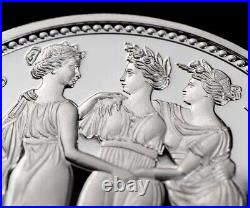 2021 St Helena Masterpiece. 1 oz Silver Proof. Coin with Box and COA. First Release Blue Label. AS OF AUGUST 23, 2021. FIRST ISSUE in new Masterpiece Collection series. Comes with Booklet/COA and Box. NGC certification # and COA # will vary as multiple coins are available. STRICTLY LIMITED TO ONLY 3000 COINS WORLDWIDE. Free S&H in US. Masterpiece 2021 Three Graces 1oz Silver Proof Coin. William Wyon was born into a minting dynasty. His father, uncle, cousin and eventually his own son all held roles at The Royal Mint in the United Kingdom. In 1815, when William was 20 years old, the Battle of Waterloo brought an end to the Napoleonic Wars. The British Government announced the Great Recoinage of 1816 and a competition to find designs for these new coins. The ambitious young William saw a chance to make his mark and created his entry; The Three Graces. While it did not win the competition, around 50 test’Pattern Pieces’ soon became collector’s items as William’s reputation grew. He went on to design the iconic’Young Head’ portrait of Queen Victoria, and his’Una and The Lion’ remains a favourite of East India Company Bullion collectors to this day. The Three Graces is an early classic from a true great, available to collectors once again as the first issue in our limited-edition Masterpiece Collection. This intricately detailed 1oz Silver Proof is delivered in a presentation case complete with a certificate of authenticity. Wyon used The Three Graces to tell the story of The 1801 Act of Union, cleverly reflecting a renewed interest in the classics to capture the moment when the Kingdom of Great Britain and the Kingdom of Ireland combined to form The United Kingdom. He cast the sisters as Scotland, England and Ireland, adding recognisable symbols to identify them with the three nations: a harp, a shield bearing the flag of St George and an oversized thistle. The Three Graces: Joy. When designing his Three Graces, William Wyon reflected an early 19th Century rebirth of interest in Ancient Greece and the Classics by using Aglaea, Euphrosyne and Thalia to represent England, Scotland and Ireland. The 1801 Act of Union had seen the Kingdom of Great Britain and the Kingdom of Ireland combine to form the United Kingdom, and William cast the mythical sisters as the three proud nations, decorating them with recognisable national symbols. He added thistles, roses and shamrocks to their hair, while at their feet you can see a shield bearing the flag of St George, an oversized thistle, and a harp. The Three Graces became more than daughters of Mighty Zeus, ancient goddesses known to personify joy, beauty and youth. Wyon gave them a contemporary relevance, evidence of his talent for storytelling that continued to influence his work throughout his life, notably in his beautiful Una and The Lion. This item is in the category “Coins & Paper Money\Bullion\Silver\Coins”. The seller is “nikewind99″ and is located in this country: US. This item can be shipped to United States, Japan, Canada.